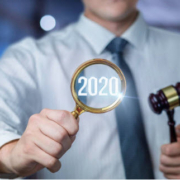 By Barry A. Bradley, Esq.
By Thomas P. Gmelich, Esq.

Last year in California, hundreds of bills were signed that became effective in 2020. This may be important to non-Californians, as well, since we seem to often start a trend that moves Eastward. (Should we apologize, or boast? — You’ll have to decide!) Here is a small sampling of our new laws. They might have you say, “Only in California!”

Our Fish and Games Code has been amended by Assembly Bill (“AB”) 588 to prohibit the killing of bobcats for sport, including for trophies. Unless a bobcat threatens human life, it now has protection until 2025, at which time its population will be reassessed.

Further, our other furry mammals – such as minks, red fox, gray fox, raccoons and beavers — can roam without fear of being made into jackets. AB273 now makes it a misdemeanor to trap such animals for the purpose of selling or trading, and AB 44 makes it a crime to sell any natural fur product within the state. (This ban will be effective in 2023.)

Animals Have Rights Not to Be Guinea Pigs

Testing of cosmetics on all non-human animals is now illegal in California. In fact, even if a company doesn’t do the testing in this state, but contracts to have it done out of state where such practices are still allowed, it will cost the manufacturer and distributor $5,000 for the initial violation, and up to $1,000 per day for each day the violation continues. SB 1249 was actually one of the last bills signed by former Governor Jerry Brown, which had a one-year delay. We’re sure the rabbits and other creatures won’t mind not having these items sprayed in their eyes or rubbed on them in the laboratories.

Perhaps “Fluffy” should be renamed “Cujo.” In an effort to protect non-suspecting pet adopters and their families from vicious animals, AB 588 requires public and private animal shelters to disclose a dog’s biting history to a potential new owner if a dog (at age 4 months or older) has broken a human’s skin.

We are all a little safer inside our residences and other places where we have a reasonable expectation of privacy. Thanks to AB 1129, it is now a crime to use a drone or other electronic device (such as hacking into a monitor or in-home camera) for the purpose of viewing or recording someone in various stages of undress. It also creates a private right to sue in a civil action.

Using “Independent Contractors” Might Be Against The Law if Misclassified

One of the most controversial bills, AB 5, has many California businesses changing the way they hire workers. Businesses who often classified some workers as “Independent Contractors” rather than “Employees” due to the independent nature of their work and lack of control over the worker, are now scrambling to reclassify everyone as an “employee.” Employees receive overtime, get regulated rest and meal breaks, and have insurance benefits, including access to workers compensation. However, the trade off is the amount of control the employer has to restrict the freedom of the employee regarding hours, methods, policies and procedures.

While targeted directly at gig workers (such as Uber and Lyft drivers, as well as your Postmates delivery person), this new law may also apply to many more contract or independent workers in California. Under this bill, workers would be considered employees and not independent contractors if the employer controls the work, directs them in the course of their work or if the worker’s job is part of a company’s main business. Uber and several other businesses are suing to stop Assembly Bill 5 from being implemented. Freelance journalists, too, have filed suit since many national publications are eliminating their California-based writers. It is expected that the price of making these people “employees” will be passed-on to the consumer. Read more.

California has become the first state to ban workplace and school discrimination based on a person’s natural hairstyle or hair texture, with the Crown Law. Protected hairstyles include braids, twists and locks. SB 188 will protect these natural hairstyles, and all human resource grooming policies should be amended to comply with this new law.

Another Year, Another Dollar Minimum Wage

With the passage of SB 142, California expands its protections for lactating mothers. While the law already requires employers to provide breaks for nursing mothers, many were forced to express breast milk in a bathroom stall or office closet. This new law requires companies to provide appropriate lactation accommodations that are close to the employee’s work area, has electrical plugs and is free of intrusion. Read more.

Employment Arbitration Agreements – Are They Legal?

Californians now have the right to learn what companies like Facebook and Google know about them, and to stop the sharing or selling of their data. AB 375 created the California Consumer Privacy Act (CCPA) which gives internet users more control over their data. Consumers can also now sue over data breaches if companies fail to adequately protect their data. We will all start seeing more privacy buttons on our browsers.

Ex Parte Gun Violence Restraining Order: Current law allows an immediate family member or law enforcement to obtain an emergency ex parte restraining order to remove a gun and ammo from a person likely to use the weapon against the person obtaining the order, which is good for up to 21 days, and following a hearing, up to 1 year. The new law, AB 61, now allows an employer, a co-worker or a teacher to obtain the Temporary Restraining Order with the understanding that they may be able to identify warning signs before violence occurs.

Semiautomatic Rifle Sales: SB 61 now prohibits the sale of a semiautomatic centerfire rifles to any person under 21 years of age. Exceptions apply to law enforcement and active military. It also limits one such rifle purchase in any 30-day period. (Licensed security companies are exempt.)

Students in elementary school who are disruptive, and even willfully defiant, can no longer be suspended or expelled (except when they are violent). SB 419 bans schools from suspending students in grades 4-8 for disrupting school activities or defying teachers and administrators. Students in grades K-3 already have this protection. Sadly, high school students must wait until 2025 for the same benefit. (This is coddling at its worst.)

Wanna Spoon With Me?

In an effort to limit our waste and the environmental impact caused by throwing away single-use utensils, plates and straws, AB 619 now tips its hat to Mother Earth – probably more so than anywhere else in the world. This new law allows restaurant customers to bring — and eat with/from — their own food containers and silverware. It also allows food vendors at fairs, festivals, and farmers markets to use reusable items, which has been against the law until now.

Barry A. Bradley, Esq. and Thomas P. Gmelich, Esq. are the founding partners of Bradley & Gmelich LLP. For the past 20 years, Tom and Barry have enjoyed litigating cases and watching the firm grow to over 25 attorneys and a full support team. Both Barry and Tom have AV-Preeminent ratings from Martindale-Hubbell, the highest peer review rating possible, and have been named Southern California Super Lawyers for the past 15 and 10 years, respectively. The firm represents businesses and employers in general civil litigation, employment law and business law matters.
bbradley@bglawyers.com and tgmelich@bglawyers.com.

Leaping Through Time – The Leap Year Enigma
Scroll to top