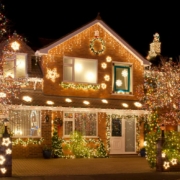 By Julie A. Bachert, Esq.

There’s nothing like a big display of holiday lights to attract a crowd. Like moths to a flame, droves of people flock to their nearest holiday light display to view the blinding illuminations that appear just once a year. In fact, holiday lights have become so much more than a passing attraction. There’s even a popular television show, “The Great Christmas Light Fight,” that has transformed holiday lights into a competitive sport! On this show, $50,000 is awarded to the candidate with the best use of lights, overall design, holiday spirit and, presumably, the biggest electricity bill. The great illuminators are applauded for their artistry and righteous holiday spirit.

To answer that question, we first need to define “nuisance.” In practical terms, “nuisance” can be rather subjective. As we see here, one person’s holiday cheer is another person’s holiday nightmare. But from the standpoint of the law, a nuisance is something that must be judged objectively. (San Diego Gas & Electric Co. v. Superior Court (1996) 13 Cal.4th 893, 938-939.) According to the law, a nuisance is “anything which is injurious to health … is indecent or offensive to the senses, or an obstruction to the free use of property, so as to interfere with the comfortable enjoyment of life or property, or unlawfully obstructs the free passage or use, in the customary manner, of any …street…” (Civil Code § 3479.)

Seen from this viewpoint, it is easy to understand how holiday light displays can be nuisances. It’s those parts of the definition that talk about interfering with the comfortable enjoyment of life or property, or obstructing the use of the street, that apply here.

There are two types of nuisances.

From the legal standpoint, there are two types of nuisances: public and private. Nuisances that affect the entire community, or a considerable number of people, are public nuisances; all other nuisances are private nuisances. (Civil Code §§ 3480, 3481.)

What are your options when you are the victim of a private nuisance? One option is to take things into your own hands. Politely speaking with the neighbors and asking them to make some changes may or may not get results. But if that doesn’t work, keep in mind that reactive tactics such as tearing out a neighbor’s lights without his consent are illegal. Such tactics are not recommended, and are an easy way to be labeled as the Grinch, and possibly the criminal, of the neighborhood. If you want to avoid that, your other option is to sue in a private civil action for an injunction, damages or both. (Civil Code §§ 3501, 3502.)

On the other hand, if you’re dealing with a public nuisance, the only real option for terminating it is through civil or criminal actions brought by public officers. Unless this nuisance causes you to suffer a special injury that is different in kind from that suffered by the general public, you have no direct remedy for a public nuisance as a private person. (Venuto v. Owens-Corning Fiberglas Corp. (1971) 22 Cal.App.3d 116, 125.) What might a “special injury” look like? A good example would be if your neighbor’s holiday display blocks your view of oncoming traffic, causing you to fear hitting a pedestrian or being in a car crash. (See, Kempton v. City of Los Angeles (2008) 165 Cal.App.4th 1344, 1349.)

What does California law say about holiday lights?

Surprisingly, there is very little California case law determining whether holiday lights and decorations are nuisances. In City of Glendale v. George, the City of Glendale filed a complaint to stop a public nuisance at a residence which was maintained as a “Santa’s Village.” (City of Glendale v. George (1989) 208 Cal.App.3d 1394, 1398-1399.) The City alleged that this use of the property was inconsistent with the residential nature of the neighborhood and that it generated so much traffic, noise, noxious fumes and odors, debris and “invasion of lights” that it constituted a public nuisance.

Eventually, the City and the property owners entered into a consent judgment that involved restrictions on the time period during which the property owners could display Christmas and other ornamental lights; a prohibition on further ornamentation of their residence; a ban on acceptance of donations or other payments at their residence; a qualified prohibition against members of the public entering or remaining on the premises; a ban on the distribution of any literature advertising the “Santa’s Village” aspect of their residence; restrictions on the volume and time period during which music may be broadcast out of doors; and more.

Notably, the Court found that two provisions of the consent judgment were unconstitutional: the provision preventing the property owners from distributing any literature advertising their residence as “Santa’s residence” and the provision banning the public from entering or remaining on the property unless they were “bona fide personal friends.”

So are holiday lights a nuisance or not?

The smidgen of California case law resolving the issue of whether holiday decorations constitute a nuisance, combined with the generous ruling in City of Glendale, supra, suggests that few want to be the Grinch or Scrooge of society. When it comes to the holiday season, perhaps lighting up your home (within reason and for non-commercial gain) is an acceptable means of expressing your creativity, artistry, and most importantly, holiday spirit.

Julie A. Bachert, Esq. is an Associate Attorney with the firm. While in law school at Washington University in St. Louis, Ms. Bachert was a Founding member of the Annual Willem C. Vis International Commercial Arbitration Moot Court Team. During this time, she was also a member of the Wiley Rutledge Intramural Moot Court, a Committee Co-Chair for the Women’s Law Caucus, and a finalist in the 1L Client Interviewing and Counseling Competition. Ms. Bachert also brings to the firm two years’ experience in Law and Motion practice.

Ms. Bachert served as Judicial Intern for the Los Angeles Superior Court of California and as a visiting law student at the UCLA School of Law, where she prepared trademark applications, Office Action responses, and other legal documents to assist clients with registering and maintaining their respective trademarks.